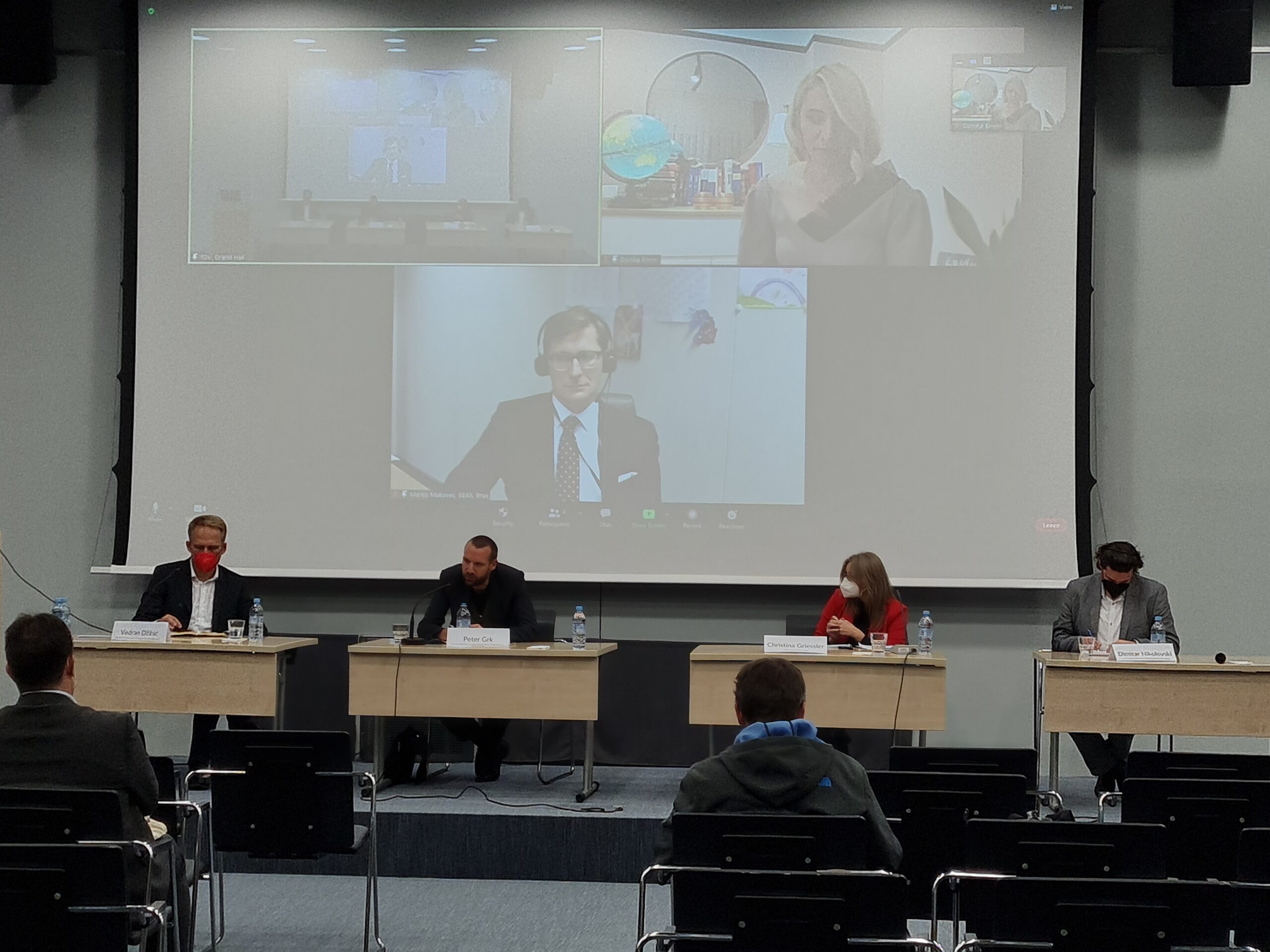 LJUBLJANA – The process of enlargement of the European Union to the Western Balkans needs to be given new creative solutions, with an emphasis on meeting the criteria in the field of rule of law, stressed the participants of the public debate “Is the EU losing the Western Balkans and/or vice versa?”, organized within the “WB2EU network”.

The panelists discussed the declaration adopted during the EU-Western Balkans summit, fulfilling the rule of law criteria, but also the geopolitical importance of the region for the European Union.

Peter Grk, Head of the Bled Strategic Forum (BSF) Department at the Ministry of Foreign Affairs of Slovenia, stated that there are two important things that arose as a result of the EU-Western Balkans Summit in Kranj.

“The first is a mention of the word is enlargement, which has been lost and we could not find it in the declarations from the previous Summits. Mentioning this word shows that there is a minimum of consensus about what our ultimate goal is. From that perspective, the Summit is good and positive. On the other hand, we do not have a deadline for the accession of the WB to the EU, and that is a bad thing,” said Grk.

According to Grk, this Summit was important because in the EU today, the focus often changes very quickly, and it is positive when 27 member states and 6 partners from the Western Balkans are discussing their relations.

He added that the economic set presented during the summit in Slovenia was another important outcome, but that relations between the Western Balkans and the EU were never just a matter of economy, but also of values.

„We wanted to be much more ambitious, but at the end of the day, what we got is a good start, but we need practical things. North Macedonia and Albania should start the negotiations. This Summit is going to be the start of something, not the end of something“, Grk said.

Donika Emini, Director of CiviKos Platform from Kosovo, assessed that the process of European integration no longer has such a strong transformative and normative power, as well as that insufficient coordination within the European Union frustrates the countries in the region that have fulfilled their end of the bargain.

“There is constant talk about geopolitics, that the EU should expand to the Western Balkans because of third actors. What is happening with the democratization of this region?” Emini pointed out.

She assessed that the question of what is the European Union is being asked today, considering that there are serious problems with the rule of law in some member states.

Emini pointed out that after the EU failed to fulfil its promise and abolishing the visa-free regime for Kosovo, it is difficult to expect anything from the EU, but that Kosovo has no other alternative.

„We need to find ways to offer creative solutions and refresh the enlargement process. Political elites, but also the citizens of Kosovo, still believe in the European project,” Emini pointed out.

She stressed the need to talk a lot and insist on the rule of law and democracy, but that this has to be done in parallel to the progress in the accession process.

Christina Griessler from Andrássy University in Budapest, spoke about the interests of Hungary and Prime Minister Viktor Orbán in the Western Balkans and pointed out that the commitment to enlargement is the national interest of Hungary.

“It is a security issue for Hungary, we saw it during the migrant crisis. If the region is not able to provide stability, that is a problem for the Hungarian border. The issue of Hungarian minorities in the countries of the Western Balkans, especially Serbia, is also important. That is one of the reasons for such good relations with Serbia, but in addition to that, the economic interest of Hungary in this region is also important”, Griessler explained.

She assessed that the region of the Western Balkans is useful for Orbán in his endeavour to develop his own foreign policy.

“The problem is that Orbán supports an approach that says that we should not talk about the rule of law in the enlargement process, that the EU should make a political decision,” she said.

She added that the problem is that sometimes it is not clear whether the Enlargement Commissioner Olivér Várhelyi is working in the interest of Hungarian foreign policy or the European Commission.

Marko Makovec, Deputy Managing Director at European External Action Service (EEAS) assessed that it is easiest to blame Brussels for the current dynamics of the enlargement process, but that the fact is that the EU made a mistake with Albania and North Macedonia.

“The whole international community is trying to help North Macedonia to overcome the problems with Bulgaria, which undermines the whole enlargement process“, Makovec said.

Makovec mentioned the importance of linking the progress in the rule of law and the enlargement process.

“If the candidate countries do not meet the necessary rule of law criteria, this will hamper the enlargement process. This is the case with almost all countries in the region“, said Makovec.

He underlined that EEAS is fully committed to reinforcing the engagement of the EU in the region.

The Conference was organised within the “WB2EU network”, a long-term project gathering 17 think tanks and academic institutions from the Western Balkans and the EU and lasting until 2023.