Europeanisation meets democracy from below:
The Western Balkans on the search for new European and democratic Momentum

This project is co-funded by the European Commission under its Erasmus+ Jean Monnet programme.

Since 2018, when the EC spoke about the “year of hope“ for EU Enlargement, until today there was not much room for optimism. The French No to opening negotiations with North Macedonia and Albania created a new vacuum in the EU and in the region. The new EC seems to regain momentum in the Western Balkans and to re-establish itself as a “global player”. After the new Enlargement Methodology of the EC was presented in February 2020 it gleams that France will agree on the opening of negotiations. At the same time, the EC is preparing a communique for the Western Balkans Summit in Zagreb (May 2020) incl. a set of priorities (e.g. strengthening of rule of law, social dimension, the issue of emigration and green agenda for the region).

On the side of the countries of the Western Balkans we face deeply rooted structural problems ranging from flawed state of democracy to the states and societies being captured by dominant elites, political parties, exclusive politics and nationalist discourses. Those problems point at the structural weaknesses of the rule of law, the fundamental pillar of any stable liberal democracy. While political elites/representatives claim to be democratic/pro-European they engage in partisan/clientelistic policies that prevent social inclusion, deepen the cleavages in the society and leave the populace with the feeling of living in a society without societal justice. At the same time political power circles largely use divisive/nationalist-populist rhetoric and engage in semi-authoritarian practices of governance which undermine democracy.

The need to engage more with democratic and emancipatory civic actors/movements in the region, to focus more prominently and consistently on the social dimension of enlargement remains a must. It is encouraging that social engagement and civic activism seem to be on the rise in the region. The recent wave of protests, from Banja Luka, Sarajevo to Belgrade or Tirana, many smaller local civic initiatives (against corruption, environmental issues, etc.) advocate for the need for more free, just societies and for a new European momentum that embodies liberal European values, rule of law, democracy and freedom. Those forces can stimulate and support positive developments from below, initiate a new wave of democratisation and Europeanisation beyond captured states and become the long-term alternative to the current elite set-up on the political scene. They can promote the social agenda more intensively than the formal stakeholders.

We argue that the next few years will be decisive for the democratic and European future of the Western Balkans: In addition to a credible enlargement perspective and a positive enlargement narrative, which needs to be reinvented and reinvigorated, it is vital to support rule of law, civil dialogue, pluralism and the fight against corruption as well as the social dimension. It is crucial to invest more in social inclusion, to support the broad vision of just and democratic societies, which needs to include various bottom-up initiatives and actors. Our “WB2EU network” will activate êconnect êresearch êdisseminate on the defined topics by creating interactions and collaborative outputs between academia/researchers with civil society/civic initiatives and stakeholders on national, regional and EU level.

The network consists of 17 renowned think-tanks, do-tanks, higher education institutes and policy centres from the countries that will be most decisive for the enlargement process in the upcoming years.

This project aims at the establishment of a network of renowned think-tanks, do-tanks, universities, higher education institutes and policy centres from the Western Balkans, neighbouring countries and EU member states that will be most decisive for the enlargement process and Europeanisation of the region in the upcoming years.

The “WB2EU network” shall become a reference point in the area of EU Enlargement and democratisation efforts to the Western Balkan countries. Besides the research and policy focus of the network, the outreach element will be of crucial importance. The discussion will be carried far beyond the 17 organisations of the network to foster the dialogue with decision-makers (on the local, national, regional level in the Western Balkans and on the European level within the EU institutions in Brussels), as well as civil society representatives, activists, higher education institutes, the media and the wider public. The network shall thereby be a catalyst, discussion and exchange platform, and knowledge disseminator. The network will furthermore actively include various civic bottom-up initiatives able to enrich and foster democracy and Europeanisation in the region.

Beyond the provision of concrete analyses, the creation of visions for the Western Balkan countries, which are also tangible for the citizens of this region and secure support for the processes of Europeanisation and democratisation, will be a central goal of the project. Having a network able to support and work on the European and democratic vision for the Western Balkans in times of multiple challenges to the EU Enlargement both internally within the countries (decreasing support for the EU, political elites partly engaged in EU rhetoric with no concrete positive reform results, authoritarian tendencies contradicting the democratic narrative) as well on the geopolitical level is vital for the success in the region. Particularly the rising influence of other geopolitical players in the region, such as Russia, China, Turkey and some Arab states, has raised the awareness among enlargement supporters that the EU and the West is not anymore the one and only international player and solely role model for the development of the region. As other powers increasingly use the Western Balkans to promote their interests which are not rooted in democratic practises, it becomes clear that a vision of free, democratic and open European Balkans is not self-evident any more. Moreover, there is a need to fight for it – to work on it as hard as possible and to promote it both in the region as well as in the EU. This is why our particular network WB2EU aims at becoming relevant over the course of the next three years and thus able to not only influence but also co-shape the European vision in the region.

Another focus will be placed on the involvement of as many young researchers as well as civic activists as possible within the network. Each organisation will nominate minimum one Junior Researcher to work on the project and engage in the debate. All network partners from the region will additionally nominate two active young civic activists for the participation in “Ideas go public Labs” and in the “Summer School”. This shall lead to 1) an increased interest and understanding of the topic of Europeanisation and democracy in the Western Balkans among young researchers and better opportunities to carry out specific research on the subject for young researchers, 2) increased opportunities in terms of employability and career development, 3) new ties and networks between (young) researchers and civic activists to raise mutual understanding for democracy and Europeanisation, 4) new ways of influencing public debates through qualified and evidence based and yet politically engaged activities.

This new generation of “young influencers” will be closely involved in organising the final public event in Brussels – “Democratic activism for Europe – New Horizons” and in contributing to the final chapter of the final book publication “Vision Western Balkans 2030 – Voices for the future”.

An active cooperation and exchange with EU institutions (DG NEAR, European Parliament, Presidencies), national stakeholders and policy-makers as well as cooperating partners as IDESE focusing on civic initiatives from below will be pivotal to empower the network and enable policy and knowledge exchange beyond the partners. Already existing networks focusing on the Balkans and the EU Enlargement like the Balkans in Europe Policy Advisory Group, TEPSA, CAS SEE, FES Southeastern Dialogue, European Fund for the Balkans, etc. will also be part of the projects’ wider capacity network. IDESE and its network will be crucial for mobilising and including the civic initiatives from below in the activities of the network.

Beyond that, the project aims at reaching out to the wider European and Western Balkans public (both on the general EU level as well as on the national level) and at creating deeper knowledge and understanding of processes of Europeanisation and the importance of mobilising and including democratic civic forces from below. A strategic partnership will be established with the influential web-portal on the EU Enlargement question run from Belgrade, European Western Balkans (https://europeanwesternbalkans.com) and the European platform opendemocracy as well as with the regional TV broadcaster N1. A series of op-eds and YouTube-videos and podcasts will be instrumental for sharing the results of the network to the wider public.

The project aims to

The network will focus on

Consistency of the objectives and activities

The composition of the network and project design ensure the stability and internal coherence of the research team and the accomplishment of the planned objectives. The “Ideas go public Labs“, the “Summer School“ and both the kick-off and the closing event offer the opportunity to critically evaluate the ongoing research, appraise its practical relevance and meet the public (incl. relevant stakeholders) to share results and promote the Europeanisation. The project design relies on the carefully calibrated expertise of independent policy research institutes and academic institutions that are part of the network.

Additionally, the network is set to continue working together and supporting the process of EU Enlargement in the Western Balkans after the end of the project, be it in form of already established personal and institutional ties, through various channels of communication and outreach established within the network and by being present in public debates on EU Enlargement through eminent members of the network. 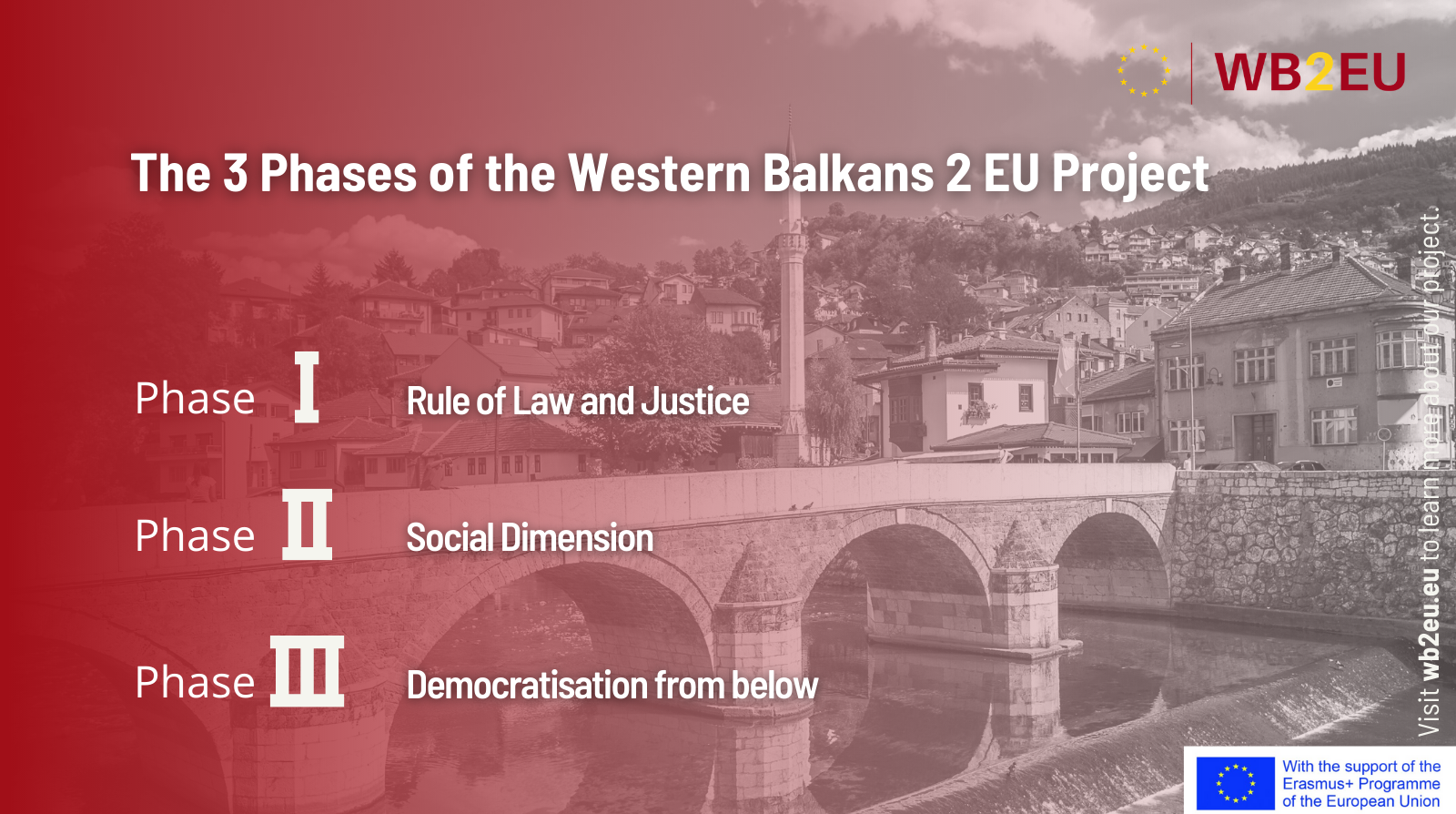 The proposed activities shall be implemented in 3 phases

“Ideas go public Labs” combine a project team meeting, followed by an intense workshop and a public outreach event. All public events for the wider public, which will include representatives from civic initiatives from below. The inclusion of the civic initiatives from below will be enabled by the regional network of IDESE (see above). Young researchers nominated by the project partners will play a very prominent and active role in the “Ideas go public Labs”, i.e. taking part in the public debate as well as being featured in YouTube-videos and podcasts that will be produced to feature main results and achievements of each of the six “Ideas go public Labs”.

There will be 15 produced by all partner organisation in each of the three phases. The “Ideas go public Labs” will serve for discussion on the drafts of the policy briefs. They will also provide room for the presentation and discussion of the final policy briefs to main stakeholders and to a wider public.

Network partners from the Western Balkans will provide national perspective on I Rule of law and justice  ê II Social dimension  ê III Democratisation from below the neighbouring countries (Croatia, Slovenia, Greece, Hungary, Bulgaria and Rumania) will provide insights of the (trans)regional dimension of the topic while policy briefs from important EU member states for the process (France, Germany and Italy) will tackle the topic from the perspective of the EU institutions and member states (EU Commission, EU Parliament, EU Council, member states).

This project is co-funded by the European Commission under its Erasmus+ Jean Monnet programme. 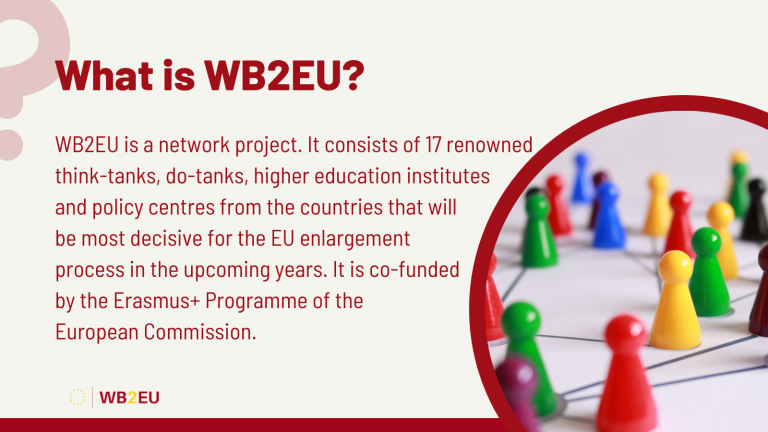