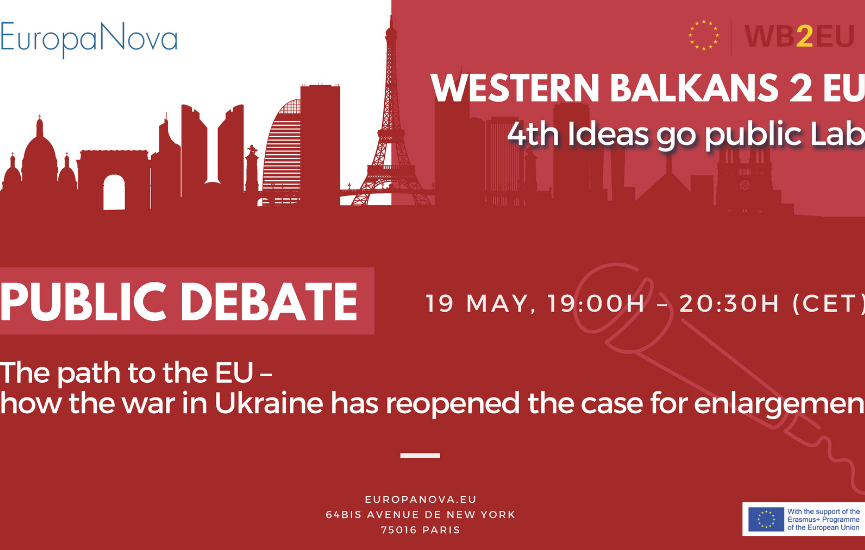 Right in between the tail of the presidential race and the head of the parliamentary elections, our WB2EU 4th Ideas go public Lab will focus on the general politics of enlargement in France. The Russian aggression on Ukraine has rekindled a movement of solidarity and mobilisation akin to those of 1956 for Hungary, 1968 for Prague or the 1980’s for Poland. The reconfirmation for Ukraine of its European destiny, in the face of war, and its domino effect on Georgia and Moldova, triggered a refreshed interest in the French public and political spectrum, for the EU’s enlargement goals and processes. In this regard, we found relevant to reflect on what this novel context could mean for the Balkans’ path into the EU. And the associated political narratives and plays.

Following the usual pattern, the Ideas go public Lab will have an afternoon specialist round table, an evening public event – followed by a formal get together – and a WB2EU Network meeting for debriefing and reflecting on the next steps in the framework of the project.

So, the WB2EU 4th Ideas go public Lab will serve the following purpose:

Nebojsa Vukadinovic, Expert for the European Commission on pre-accession funds

Picture gallery 4th Ideas go public Lab: The path to the EU – how the war in Ukraine has reopened the case for enlargement (Public debate, 19 May, EuropaNova premises)